Author and cartoonist Paige Braddock, Creative Director at Schulz M. Creative Associates, is kicking off a reading tour for a new children’s graphic novel. Due out in February 2015 from Andrews McMeel Publishing, Stinky Cecil in Operation Pond Rescue is the hilarious tale of a group of amphibians (and one free-range hamster) who set out to save their tiny pond home from one very large steamroller.

Mark your calendars for the following Stinky Cecil tour dates: 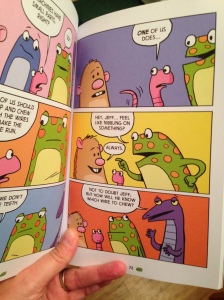 Stay tuned for more reading tour announcements on StinkyCecil.com, Facebook, and Twitter. We hope to see you there!